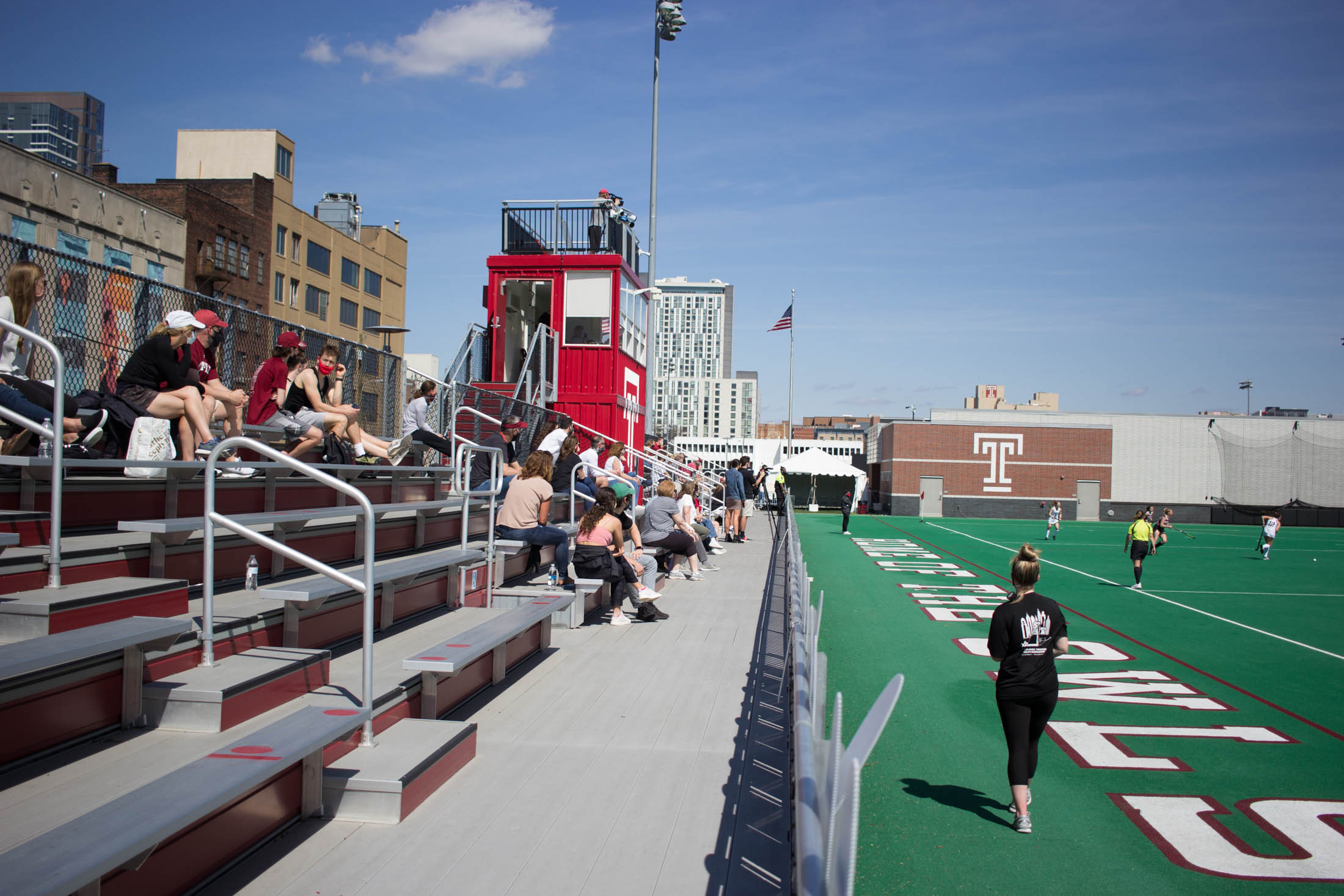 At each of Sydney Beck’s field hockey games last season, his mother, Kathy Beck, was in the stands to cheer him on. But this year, due to COVID-19 restrictions, Kathy Beck had to stand outside the gates of Howarth Field to watch her daughter’s games.

â€œIt would be hard for me not to be there,â€ said Kathy Beck. “Even if I have to stay outside I’m going to do it, so it actually means everything so I can be back in the stadium.”

Temple University Athletics began allowing a limited number of fans in the stands for outdoor sports competitions at Temple Sports Complex and Howarth Field earlier this month. Despite the regulations, the student-athletes are just happy that their families can see them play again.

Both stands are operating at 20 percent of their capacity. Prior to the COVID-19 restrictions, each could carry 500 people to each pitch, but with social distancing requirements in place, the capacity is reduced to 96 people for each pitch, said Lee Roberts, senior associate athletic director for facilities and event management.

Student-athletes receive two free tickets for guests to attend home games. While traditions of match-day tailgating are no longer allowed, student-athletes and parents have found different ways to capture the match-day experience.

Prior to a home game, the student-athletes allocate their tickets to the guests who will be present on the day of the game. The list is then sent to security to make sure they know who is coming in, said Sydney Beck, a second-year forward with the Temple field hockey team.

Upon arrival at Temple Sports Complex or Howarth Field, guests are permitted entry 30 minutes prior to the start of the game. Parents must show security photo ID to ensure their name is on the list provided by student-athletes, said Sydney Beck.

â€œThey closed the restroom at our facility, so it’s just for you to go, sit down, watch the game and you are on your feet,â€ said Sydney Beck. â€œThey are not allowed to go out. If they do, they must be outside the door.

Kathy Beck notices the changes from last season, but is aware of distancing herself from other parents and understands the security team to make sure safety comes first, she said.

Although family members could not mingle during the game, parents made a point of being the best section of fans and showing their love and support for the team, said Lauren Zinkl, midfielder. junior field for the Temple lacrosse team.

â€œMy dad led our cheers when we score, it’s good to find our cheering section every time we score,â€ Zinkl added.

Jenn Rodzewich, a senior midfielder with the Temple lacrosse team, misses the tailgates before and after the game because the parents would cook food for everyone, Rodzewich said.

But in their absence, Rodzewich feels lucky to have her father, who is her number one supporter, back in the stands for his final season with the Owls, she said.

â€œMore recently our Florida game had fans, which Florida fans were allowed in the stands, so having a Temple crowd there was really helpful because Florida was a really big game for us,â€ added Rodzewich.

As with the lacrosse team, the parents of the field hockey team brought food and snacks last season. Everyone would set up chairs and walk around the Temple Sports Complex with their family to talk about the game, Sydney Beck said.

As the 2020-21 sports season draws to a close, Reo believes the students will be back in the stands and things will start to return to a new normal during the 2021-22 sports season, she said.

Being side by side with the families of the girls watching Temple field hockey means everything to Kathy Beck, who has been attending field hockey games for 10 years, she said.

â€œFour years go by quickly and you don’t get them back,â€ added Kathy Beck. â€œIt’s wonderful to be there. “

15 independent outdoor activities for kids so you can just supervise