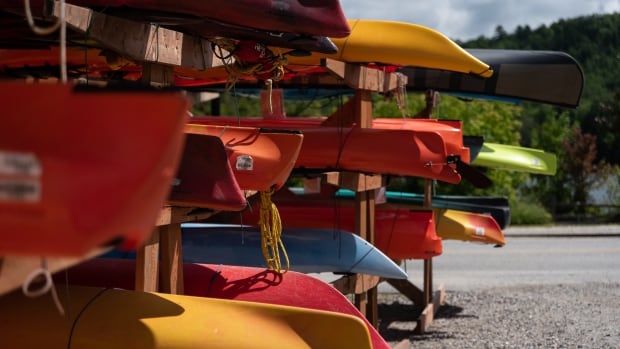 After a surge in demand for outdoor recreation equipment during the COVID-19 pandemic, sporting goods stores in Ottawa and Outaouais say business is gradually returning to pre-COVID-19 levels. pandemic.

Businesses selling equipment including bicycles, kayaks, canoes, golf clubs and even home fitness equipment such as dumbbells and weight plates saw unprecedented demand during the first phase of the pandemic.

This demand, combined with supply chain issues, meant that many items were out of stock for months.

Because travel was complicated and often expensive during the pandemic, and with summer camps and other activities for children and young people in perpetual limbo, families full of unspent vacation money turned to the great outdoors, Burton said.

Demand decreases as restrictions are lifted

This year, however, the outdoor sporting frenzy is waning.

“It’s like the gold rush,” he explained. “The gold rush was great, but it died down.”

Vicki Schouten, owner of Wakefield Expeditions, nestled on the banks of the Gatineau River, is having a similar experience with her business.

She initially feared she would struggle to stay afloat as businesses were closed in an attempt to curb the spread of COVID-19.

Instead, she saw an unexpected increase in business.

“We went from being very nervous about the future to trying to manage people’s expectations,” she said. “The first summer [of the pandemic] we basically sold just about everything.”

Schouten added that while demand remains strong for paddle board, canoe and kayak rentals, sales of those items have begun to slow.

“A year ago you couldn’t buy a canoe, kayak or paddle board,” she said. “Now there are some available.”

Bikes and bike parts are another story, and Schouten said she expects shortages to persist for at least a year.

He points to poor weather in the area to kick off the summer as a contributing factor. There were few good days for cycling, the region’s most popular activity during the summer months.

Difficulty in obtaining inventory forced van Dyke to plan far further ahead than before.

“We plan two years to secure these stocks,” he said. “[It’s] a huge challenge.”

To make up for the supply shortage, van Dyke said the Chelsea site has focused more on servicing bikes.

Rebound in interest in group activities

Although demand for new equipment has declined, interest in exploring the great outdoors continues and the desire for group activities is growing.

The Ottawa Outdoor Club organizes a variety of activities for its members, including canoeing, biking, skating on the Rideau Canal and even city walks.

Club chairman Rob Burnfield said he would expect around 200 members in an average year. That number fell to around 100 during the pandemic, he added, but it’s now bouncing back.