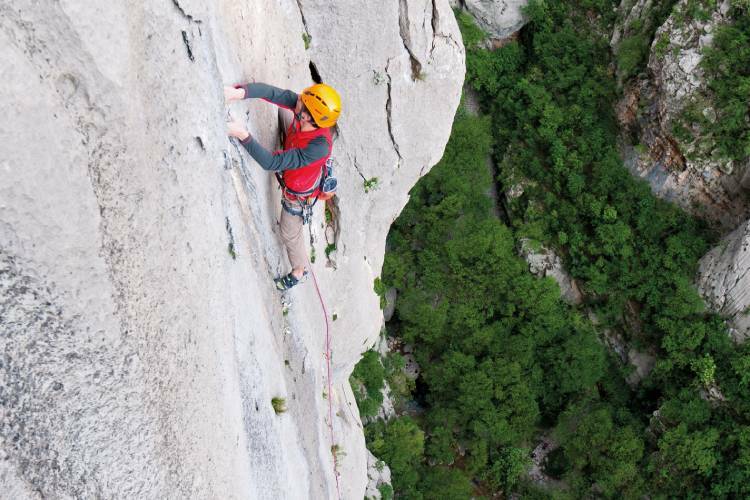 Croatia is a land of sports champions. Millions of people around the world have watched the country’s footballers, tennis players and basketball stars take to the biggest stage and win the most prestigious tournaments and trophies.

And yet, Croatia has barely four million inhabitants, less than half that of London.

The reasons can be physical, active lifestyle and deep national pride. Then there is also the landscape itself. Croatia is blessed with spectacular mountains for skiing, hiking and caving, lush cycling country, fast-flowing rivers – not to mention one of the most beautiful coastlines in the world, ideal for sailing.

With so many places unspoilt and so little built on or disturbed by industry, Croatia attracts active visitors of all ages and abilities. Children can learn the basics of sailing on the calm, clear waters of the Adriatic, the business traveler staying in Zagreb can descend to Sljeme for a day of skiing, and anyone who enjoys horseback riding will spend a day on the land in Slavonia.

Paklenica National Park is a popular destination for rock climbing. Close to the sea, a stone’s throw from Zadar, Paklenica offers nearly 600 marked routes of varying degrees of difficulty. The shortest are in Klanci, the narrowest part of the Velika Paklenica canyon. These are suitable for even the youngest climbers, with the right gear and headgear, of course.

The best known rock is Anića kuk, 350 meters high, dotted with various routes, including some for those who prefer to tackle it unaided. The main climbing season begins in spring and lasts until late autumn.

For hikers as well as climbers, the Velebit mountain range runs along the land side of the Kvarner Gulf for almost 150 km from north to south. This forbidden and inhospitable wall of jagged gray peaks offers a spectacular hiking route, winding from side to side of the central ridge of northern Velebit. With deciduous forests covering the eastern side and thorny Mediterranean scrub covering the western slopes, the full variety of Croatia’s diverse highland flora is on display.

The most popular section of the trail, and one that can easily be attempted as part of a day trip, is the northern end, which starts just south of the Zavižan weather station and heads towards Rossijeva koliba , an unmanned mountain refuge two or three hours walk. It’s a truly stunning trek, the landscape changing at every turn of the way, with sudden glimpses of the Adriatic in between.

Just outside Zagreb, Sljeme, the highest peak in the Medvednica Nature Park, offers practice ski runs for enthusiasts, night skiing, sledding and snowboarding for enthusiasts of all ages and of all levels. There is snow on Medvednica, and the ski season starts at the beginning of the year.

Croatia is one of best sailing destinations in the world. Of the more than 1,000 islands lining the country’s long coastline, many are close together, so sailing distances can be relatively short and, thanks to generally calmer winds, safer. In addition to renting your own yacht and captain, who will know the best beaches and restaurants, you can also learn to sail in specialized schools on the coast. A basic three-day course costs around 300 euros, a five-day course 600 euros.

With fast-flowing rivers like the Cetina near Omiš, the Mrežnica near Karlovac and the Kupa near Rijeka, Croatia can offer plenty of white water sports. Rafting on the Cetina takes place in the lower part, with more test waters further upstream. Beyond 12 km, the currents can be very strong – the Cetina is also used for hydroelectric power. Rafting trips on the gentler stretches are usually organized from Omiš, including a shuttle service to the site.

For spectacular rafting, head to the Mrežnica near Karlovac, with no less than 93 waterfalls adorning the 63 km course of the river before it reaches the town. The lower part closer to town is easier for families and younger people. For more adventure amid spectacular scenery, the Kupa runs through the picturesque Gorski kotar near Rijeka. Rafting trips take place along the upper ten kilometers of the 200 km Kupa route from a lake of green waters in Risnjak National Park.

Istria is a perfect country for cyclists. The terrain varies – some roads are asphalt – but the scenery is invariably beautiful, if challenging at times. Around 2,600 kilometers of trails stretch across the region in all directions, with bike-friendly hotels and rental companies along the way, and the reward of superb pasta and wine at the end of a day tiring and satisfying.

Many routes tracing the hilly interior. the one that combines both notched and gourmet is the Sentier de la Truffle, which begins and ends in Buzet. Starting at the foot of the Ćićarija mountains, the route covers almost 35 kilometers and takes three hours, with an elevation gain of 870 meters. The Bella Vista Trail, which begins and ends in Labin, lives up to its name with beautiful vistas over Kvarner Bay and a continuous series of photo ops. It stretches for 33 kilometers and should take two hours.

One of the most unique trails is the Parenzana, which follows the tracks of the narrow-gauge railway of the same name that ran from Trieste in the early 1900s. Renovated and revived, the line has since been dedicated to hikers and cyclists who now enjoy the panoramic views of Motovun, Buje and Grožnjan, just as train passengers did more than a century ago.

Mainland Croatia is known for its rolling vineyards, endless wheat fields and proud equestrian tradition. Stables, riding halls and breeding centers are part of the landscape here, along with a particular equestrian route certified internationally for equestrian tourism: Bilogora in Bjelovar-Bilogora county.

Tradition here is sacrosanct. The Bjelovar Border Guard Hussars date back to 1756 and still perform at key events in Croatia and abroad, maintaining a connection to the history of Habsburg-era military cavalry. Most visitors come here to explore the slopes of Bilogora, Papuk and Moslavina on horseback, trails stretching nearly 200 kilometers. Bilogora extends over 90 kilometers, dotted with 15 equestrian associations and ten rural tourism farms, providing guides, local gastronomy and accommodation. Beginners might want to start with riding lessons at Čazma, three hectares of fenced pasture reserved for horses.

This article is sponsored by the Croatian National Tourist Board: “Croatia full of life”.