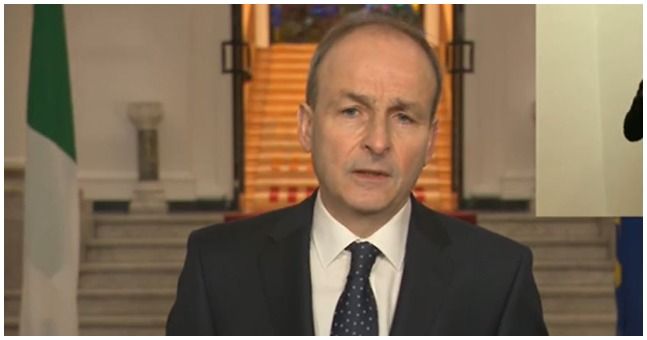 The Taoiseach addressed the nation.

The Taoiseach MicheÃ¡l Martin has confirmed that pubs and restaurants are to close from 8 p.m. to midnight Sunday evening under new restrictions to fight Covid-19.

The Taoiseach made the announcement following advice from the National Public Health Emergency Team (NPHET) to curb the spread of the virus in light of the new Omicron variant.

In addition to pubs and restaurants, the 8 p.m. closure will also apply to indoor sporting, theatrical and cultural gatherings, including cinemas.

Wedding receptions, on the other hand, are permitted after 8 p.m. but must be limited to 100 guests.

Advice on movement restrictions for all close contacts will also be improved.

“For those who received a booster at least a week ago, they will have to restrict their movements for five days and pass three antigen tests,” the Taoiseach explained.

“For those who have not yet received a booster, they should restrict their movement for 10 days. The HSE will consider the best testing regimen for people in this category.”

In addition, all passengers arriving in Ireland are now advised to perform antigen testing daily for a period of five consecutive days, starting from the day of arrival.

During this time, the current limitations of home visits should not be affected.

Currently, people from up to three households can meet in a fourth household.

The 8 p.m. closure for pubs and restaurants does not apply to take out or delivery services.

It was reported earlier on Friday that a potential 5pm curfew for hospitality was on the cards following advice from NPHET.

However, Cabinet subsequently agreed to implement the 8 p.m. curfew, with the new restrictions remaining in effect until January 30.

In his speech announcing the new restrictions, the Taoiseach said Ireland would experience a “massive increase in infections” due to the Omicron variant.

â€œThe challenge we face, as a government and as a people, is how to slow the increase in the infection to come and how to keep it from getting out of hand,â€ Martin said.

â€œLeft unchecked, this new strain will pose a very significant threat to hospitals and intensive care, but also a threat to society and the economy as a whole.

“It is spreading so aggressively, across all age groups, that we are likely to see infections at a rate far greater than anything we have seen to date.”

The Taoiseach said the new restrictions were being introduced to slow the spread of the Omicron variant as people receive booster shots.

“Anything that can be done to get [boosters] in the arms of people is being done, “he added.

The global outdoor furniture market is expected to record a