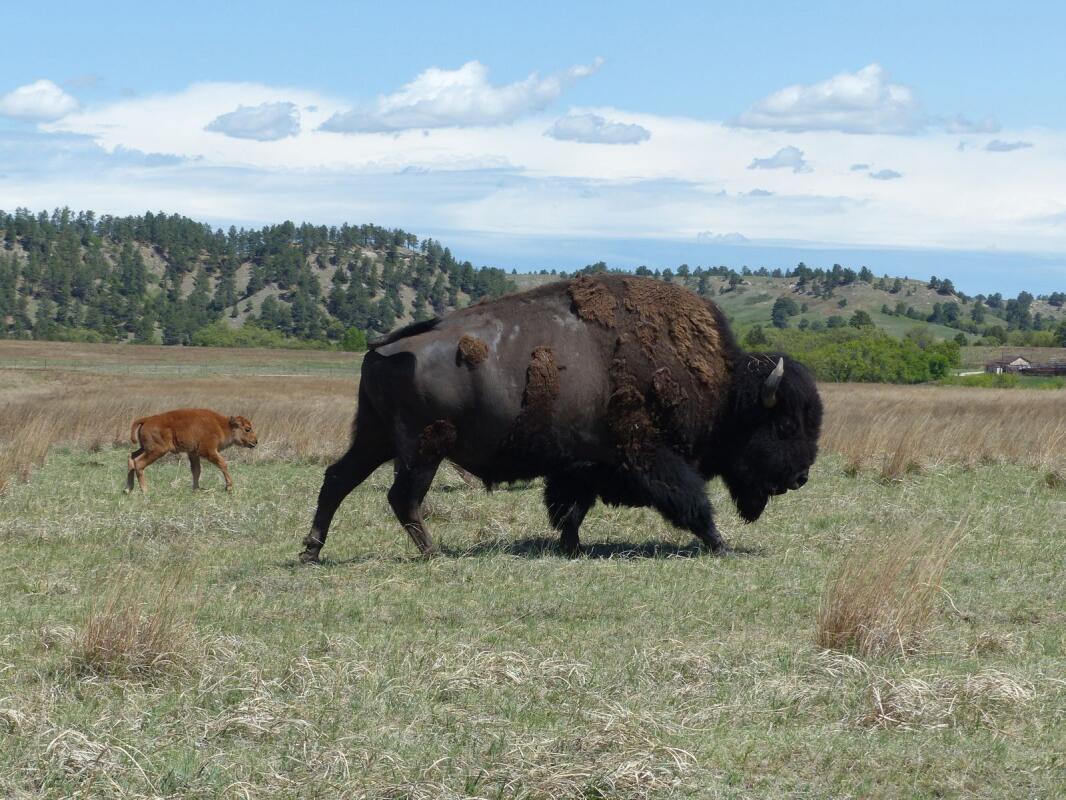 An American bison and her calf are seen at the Fort Niobrara National Wildlife Refuge in Crawford, Neb. Bison once roamed the prairies of North America in massive herds. Today, the sanctuary is home to a herd of approximately 350 bison. (Marion Patterson)

We weaved our car through pines and spruces until the winding gravel road came to an abrupt end. The view in front of us was so stunning that we parked, grabbed folding chairs from the trunk, and spent an hour taking in the view from our perched island.

No ocean or massive lake surrounded our island. Instead, we sat on Casper Mountain a few miles south of Wyoming’s second largest city. Lacking a snow-capped peak, it is not a classic mountain and is best described as a high ridge surrounded by endless miles of shortgrass prairie. Its high altitude captures the humidity and coolness that nature denies to the lower meadows that support pines and spruces. It is an ecological island filled with isolated plants and wild animals that cannot survive below.

Casper is a gateway to the West. Too many Iowans cross quickly en route to Yellowstone or the Tetons and miss the city’s charm and diverse attractions. We spent four days exploring museums, restaurants, trails, and the pine-clad mountain of Casper, just a half-hour drive from downtown.

No, Casper is not named after a ghost. It takes its name from 20-year-old Second Lieutenant Caspar Collins. After he was killed by Native Americans in 1865, a fort and town were named after him. Somehow the spelling of her name became confused and the second “a” in her first name became an “e”. That’s Casper to this day.

We started our visit at the National Historic Trails Center, high up on the other side of town from the mountain. After two hours of immersing ourselves in static and interactive exhibits, we emerged with a new understanding of the area’s significance in American history.

By the mid-1800s, Oregon, California, and Mormon trails all ran through what would become the town. Thousands of Americans crossed the continent in search of what they hoped would be a better life in the West. At Casper they made the dangerous crossing of the North Platte River. Some drowned. Others succumbed to disease and malnutrition along the arduous trails. Few were harassed by Native Americans and most eventually reached their destination to start a new life.

The Trails Center helped us realize how important these historic dirt and mud trails were to the expansion of the United States and the hardships families endured while walking across the continent. If these brave travelers were lucky, their goods were transported in a cart pulled by oxen or mules. Some just wore what they could. Many Mormons used their own muscles to push and pull handcarts laden with goods.

The Trails Center is operated by the Federal Bureau of Land Management. Admission is free and it’s close to downtown and less than a mile from the freeway.

Transportation is still an important part of Casper’s economy, but the dawn of the oil age spurred the town’s growth. Beneath the prairies and rocky outcrops is the massive Salt Creek oil field, which has produced more oil than any other field in the Rocky Mountain region.

The high value of oil sparked one of America’s most notorious scandals. In the early 1920s, under the administration of Warren Harding, oil companies bribed government officials and secured leases to drill on federal lands at low rates without the hassle and cost of bidding. Today it is remembered as the Teapot Dome scandal after a distinctive rock formation north of Casper.

Unfortunately, Teapot Dome isn’t open to visitors, but the Salt Creek and Fort Caspar museums interpret the area’s oil and mining history as well as Native American and trail history. Fort Caspar got its spelling correct and is located on the site of an 1865 military post and river crossing.

The local restaurants are known for their delicious Wyoming beef and bison, which we enjoyed one evening. And, on the other hand, we opted for dinner at Pho Saigon. For a town of just 50,000 people, Casper is dotted with a surprising diversity of ethnic restaurants offering cuisine from around the world. Enjoying restaurants and cafes gave us museum breaks.

We were surprised to arrive in Casper in the middle of a snow storm in mid-May. Luckily, it quickly melted, allowing us to drive half an hour from our hotel on a winding road to the top of Casper Mountain, where we enjoyed the view mentioned earlier. Many campgrounds are located in the pleasant shade of mountain pines and welcome summer passers-by. We set up our lawn chairs in a snowy campsite and sip hot coffee before continuing.

Nearby is the Hogadon Basin ski area. Almost everyone has heard of the famous ski resorts in Colorado, Montana and Idaho, but few know about Hogadon. A short drive from downtown restaurants and hotels, its trails begin at an elevation of 9,000 feet and feature a drop of 600 feet. “It offers nice and inexpensive skiing close to town. Adult daily lift tickets are only $55 with season passes at great prices,” said Tia Troy of Visit Casper.

Skiing is a winter sport, but most tourists pass through Casper in the summer. Whitewater rafting and kayaking provide warm-weather entertainment in the city. Where once Oregon Trail hikers dreaded the treacherous crossing of the North Platte River, today kayakers and Tubers weave their way through a whitewater course similar to those in Manchester and Charles City. Those less aquatic can cycle or walk on miles of paved trails that run along the river and through town. Several companies rent kayaks and bicycles.

Need western gear, boots, jeans and a wide-brimmed hat? A western-themed chain store is a short drive or bike ride from most hotels and offers an amazing array of cowboy clothing and gear.

Part of the fun of visiting Casper was the drive. At Cedar Falls, we turned onto US Hwy. 20, an iconic highway that points west, almost as straight as an arrow, 757 miles from Casper.

Iowans regularly cross Nebraska on Interstate 80 and say it’s the most boring road in America. They should try US Hwy. 20, which hugs the line of South Dakota parallel to the major highway. The highway enters Nebraska at an elevation of 1,106 feet and exits the state approximately 3,570 feet higher. Nebraska is not flat! It slopes upward to the west with the land gradually blending from the cornfields in the east to the Sand Hills near the center of the state and finally to the beautiful Pine Ridge country near Wyoming.

We like to drive through Cornhusker State on US Hwy. 20 so much that we took three days to go to Casper. The first night we camped at Smith Falls State Park and canoed the Niobrara River the next morning.

Afterwards, we drove through a herd of bison in the Fort Niobrara National Wildlife Refuge, enjoying with only a few other motorists and none of Yellowstone’s famous bison jams. Continuing west, we visited the college town of Chadron, Neb., and the museum dedicated to the author, Mari Sandoz. On our second night we camped at the magical Toadstool Geological Park north of Crawford, Neb. As we dined on camp food, the setting sun highlighted the nearby Badlands which contain fossils of ancient extinct mammals.

After four nights in Casper, we had to return to Cedar Rapids and retrace our steps on US 20, this time heading east. Unlike our leisurely trip out West, we arrived in Sioux City in a long day of driving. After camping in Little Sioux County Park, we were home the next day at noon.

A week is plenty of time to drive from eastern Iowa and see Casper. It is a charming gateway town to the immensity of the American West. Some days it offers restaurants, outdoor sports and history. Motels and campgrounds abound. For more information, visit www.visitcasper.com.

Rich and Marion Patterson have a background in environmental science and forestry. They are co-owners of Winding Pathways, a consulting firm that encourages people to “create wonderful work sites”.

By the mid-1800s, Oregon, California, and Mormon trails all ran through what would become Casper, Wyoming. Learn all about treacherous trails at the National Historic Trails Center. (Marion Patterson)

If you need western gear, there are plenty of stores that carry an incredible array of cowboy clothing and gear. (Visit Casper)