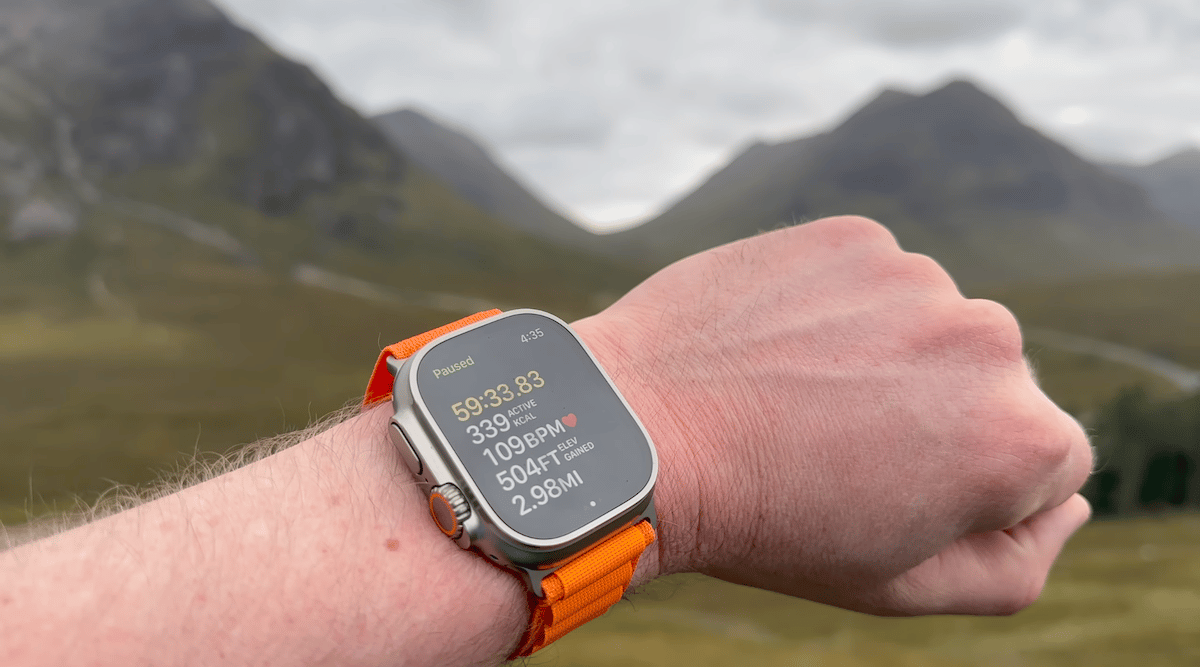 But if you’re looking for a review from a hiker’s perspective, YouTuber David Smith of @DevelopingPerspective has you covered. Smith tested the new Apple Watch Ultra in the beautiful and rugged terrain of the Scottish Highlands during a 3-day, 61-mile trek.

It tested navigation through the new Compass Waypoints and Backtrack features, battery life, siren volume, action button usability, and overall usefulness of the watch. He wanted to know if the watch was going to be reliable, help him not get lost, protect him and justify his price.

At the end of the long trek, Smith called the 49mm Apple Watch Ultra the best smartwatch for outdoor activities, offering a bit more than regular Apple Watch models like Series 8 or Series 7.

The 12 mile hike used 20% battery at full brightness. At the end of the first day, hiking 18 miles with full brightness and constant engagement with apps, the smartwatch still had 37% battery left. With the new low power mode, it would have gotten more. He thinks this would not have been possible on an older model.

The interactive topographic map showed his current position and helped him find his hiking route. The navigation of a typical sports watch is not comparable to the navigation details and user interface of the Apple Watch Ultra.

One downside was that the Compass Backtrack feature didn’t launch automatically. Overall, its wrist navigation was absolutely amazing.

Although the customizable action button lets you start a workout instantly, it irritated Smith by ending his active workout and starting a new one in another app when he accidentally bumped into it while hiking. 24 miles. He was annoyed to have a two-segment workout instead of a full workout.

So for him, the action button is a failure because he ended an active workout.

In rainy and windy weather conditions in Scotland, the Apple Watch Ultra delivers impressive audio quality with clear sound for phone calls or voice recording. The microphone did not produce static electricity and did not pick up surrounding noise.

Compared to a loud human voice and a whistle, the Apple Watch Ultra Siren produced a decent loud noise at a distance of 40 meters in a rainy and windy environment. For Smith, the most useful feature of the siren is that it will continue to operate without constant human intervention to operate, and its sound is unnatural, cannot be mistaken for a bird or animal, and will attract attention. in rescue efforts.

Alpine Loop is comfortable to wear and has a strong and stable grip thanks to the titanium buckle.

At the end of a 61-mile ride, Smith used a car analogy to explain the difference between an Apple Watch Ultra and other Apple Watch models.

He said the 49mm Ultra is a pickup because it’s a bit more rugged and more capacity, making it incredibly useful for outdoor activities with that extra something. While other Apple Watch models are sedans.